A few weeks ago I visited the British Library to see the John Betjeman Exhibition there.  It really is an astonishing place and one wonders what its value would be today in money, virtually priceless.  The 'Turning the Pages' exhibition which I also had a look at has on display front page news from various historic dates with copies of old newspapers to take home free.  The permanent Sir John Ritblat Gallery is the highlight with over 250 ancient manuscripts including some of the earliest texts of the Quran and holy books of Hinduism and Buddhism, documents from the Mughal Empire, notebooks of Leonardo da Vinci, a letter from Newton and first editions of some of his books, letters from Elizabeth I, Shakespeare's First Folio, drafts of Seamus Heaney's poem 'The Shipping Forecast' (slightly different from the published version) which is Lady Jay's favourite poem, writing by Jane Austen, Joyce, Alexander Pope (drafts of Pope's The Illiad of Homer, written mostly on the backs of letters to his mother, with his detailed and rather complex drawing of the shield of Achilles), the original Alice's Adventures Underground.  Musical scores by Mozart, Handel's ‘Messiah’ and songs written on scraps of paper by The Beatles.  There was also the Codex Sinaiticus: the earliest complete text of the New Testament (so different from the version we know) – And, of course, the Magna Carta.  Probably much else but I lost my set of notes along with my wallet containing £s and cards! 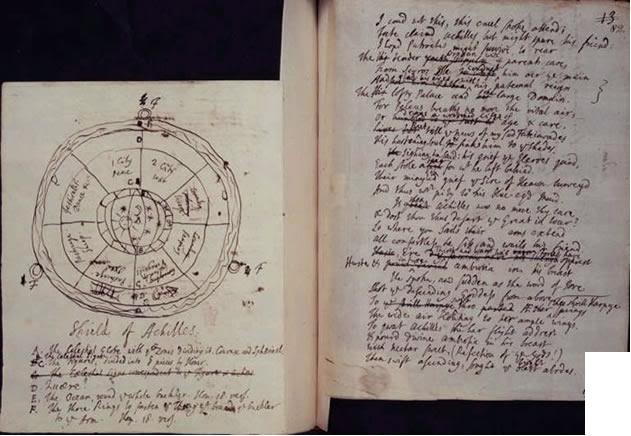 On 12th, I set out for a day in London, primarily to see the Rodin exhibition at the Royal Academy of Arts, I ended up visiting a lot of churches.  Firstly my favourite church – That of St Olave's, Hart Street which thankfully now has an accessible churchyard (always desultory) following lengthy building work going on in it and its entrance to the church was open for the first time – A small but deeply contemplative place which gives lunchtime piano recitals.  I used to love the fact that it was a dimly lit church but now they have installed new lights inside which do  it no good.  There's hardly ever anybody there at St Olave's and even today I gloried in the church alone in the church.  Charles Dickens wrote 'One of my best beloved churchyards, I call the churchyard of Saint Ghastly Grim; touching what men in general call it, I have no information. It lies at the heart of the City, and the Blackwall Railway shrieks at it daily. It is a small, small churchyard, with a ferocious, strong, spiked iron gate, like a jail. This gate is ornamented with skulls and cross-bones, larger than the life, wrought in stone; but it likewise came into the mind of Saint Ghastly Grim, that to stick iron spikes a-top of the stone skulls, as though they were impaled, would be a pleasant device. Therefore the skulls grin aloft, horribly thrust through and through with iron spears. Hence, there is attraction of repulsion for me in Saint Ghastly Grim, and, having often contemplated it in the daylight and the dark, I once felt drawn toward it in a thunderstorm at midnight. 'Why not?' I said, in self-excuse. 'I have been to the Colosseum by the light of the moon; is it worse to go to see Saint Ghastly Grim by the light of the lightning?' I repaired to the Saint in a hackney cab, and found the skulls most effective, having the air of a public execution, and seeming, as the lightning flashed, to wink and grin with the pain of the spikes. Having no other person to whom to impart my satisfaction, I communicated it to the driver. So far from being responsive, he surveyed me -- he was naturally a bottled-nosed, red-faced man -- with a blanched countenance. And as he drove me back, he ever and again glanced in over his shoulder through the little front window of his carriage, as mistrusting that I was a fare originally from a grave in the churchyard of Saint Ghastly Grim, who might have flitted home again without paying'. 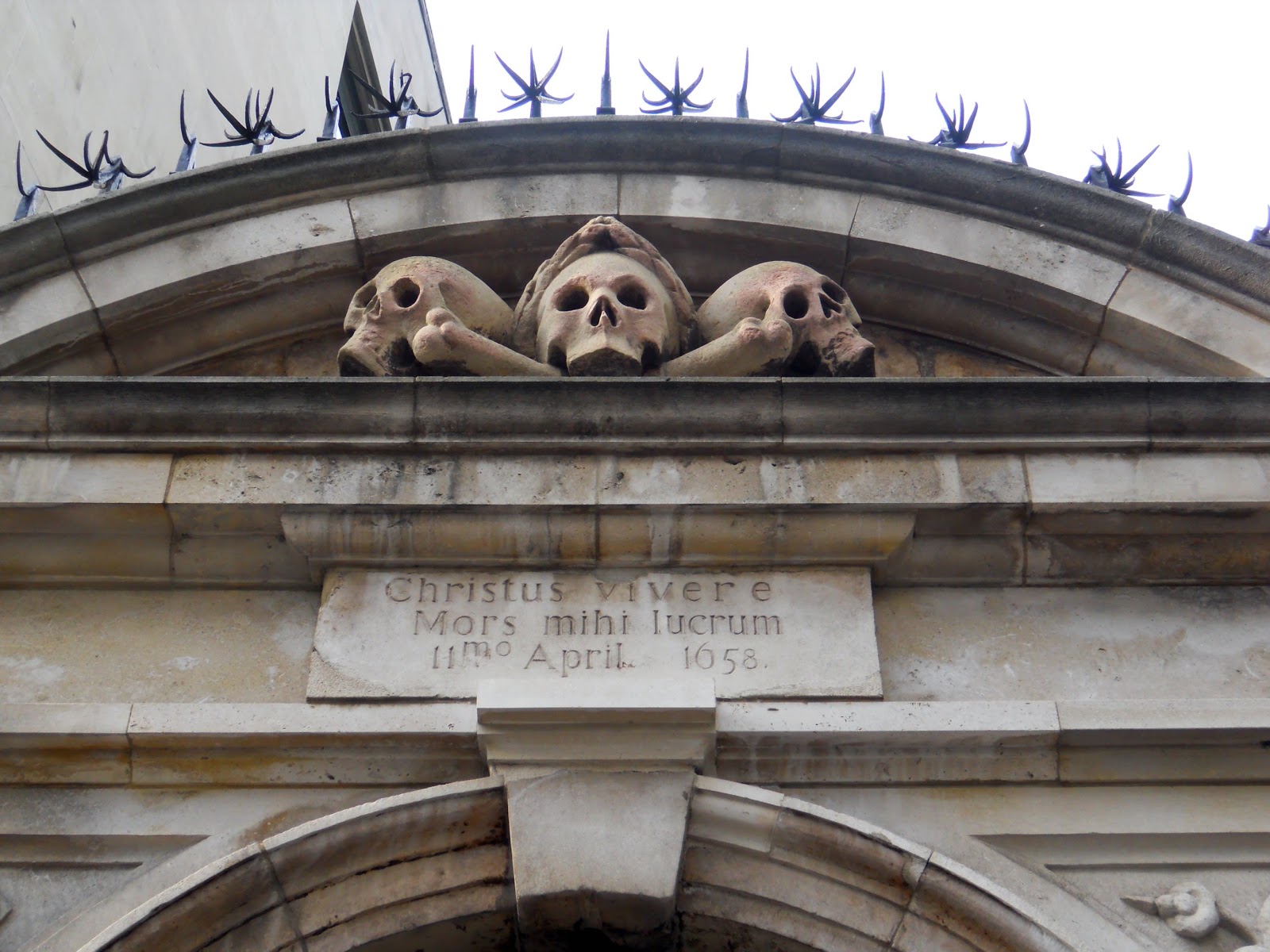 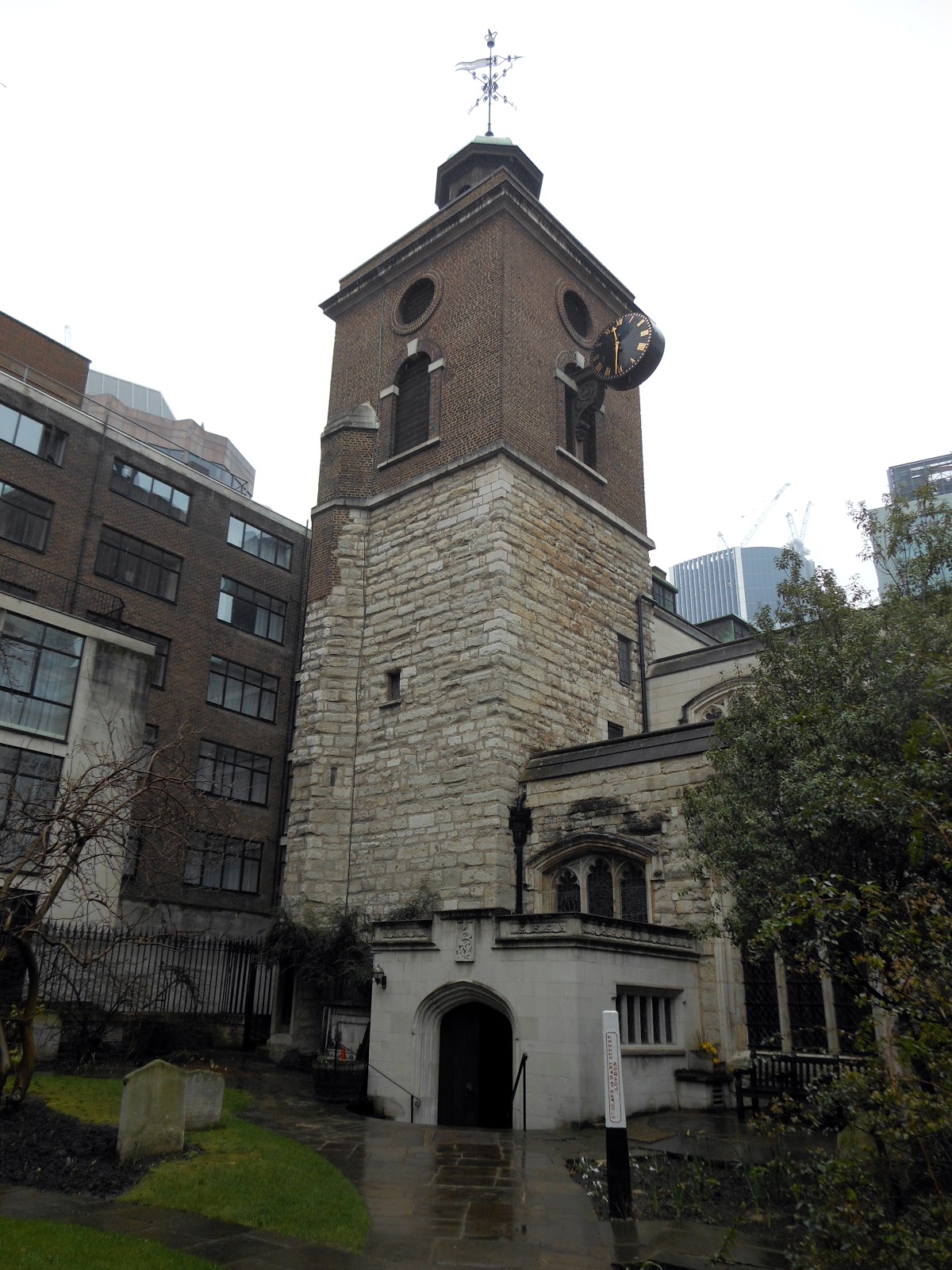 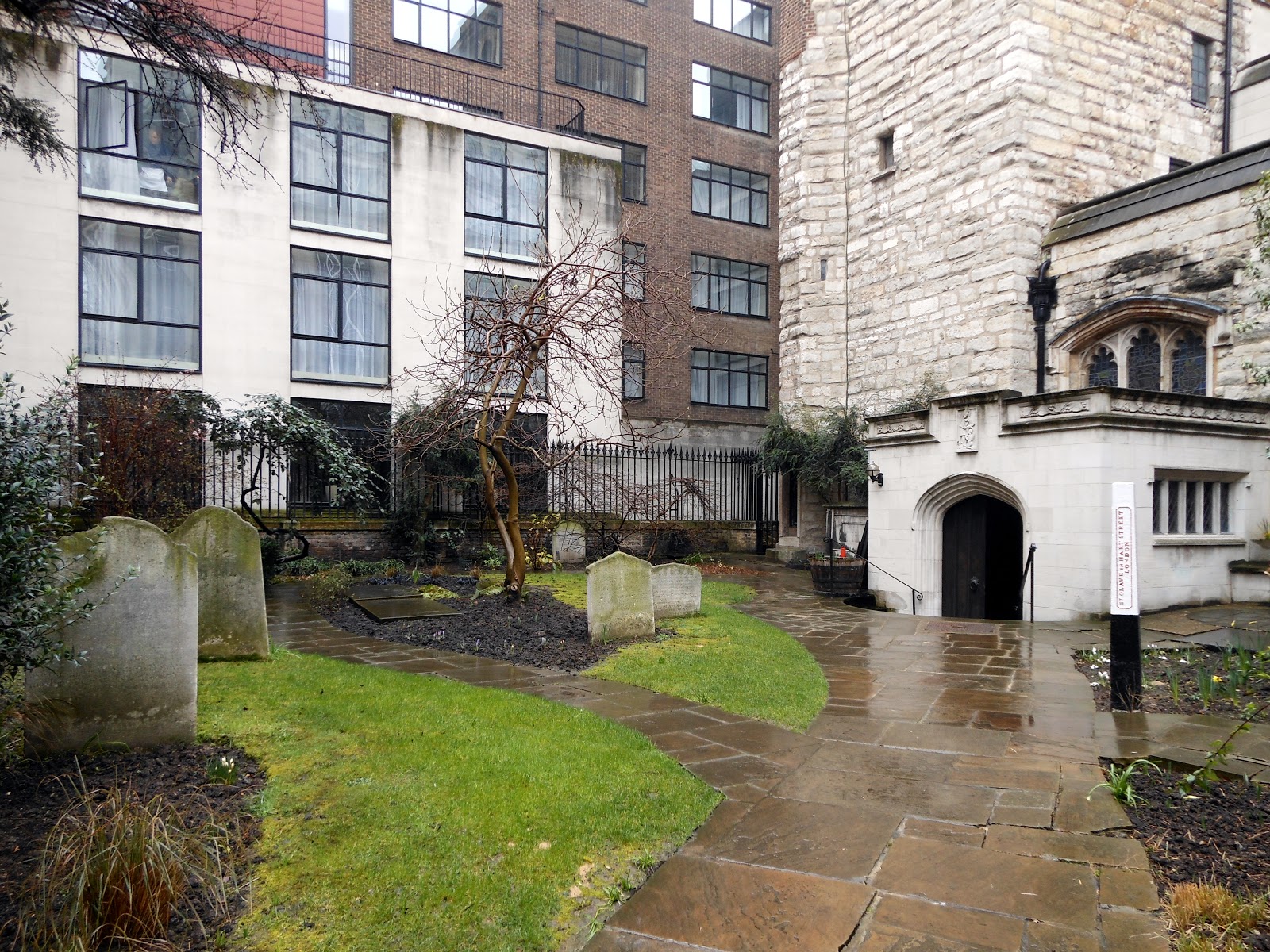 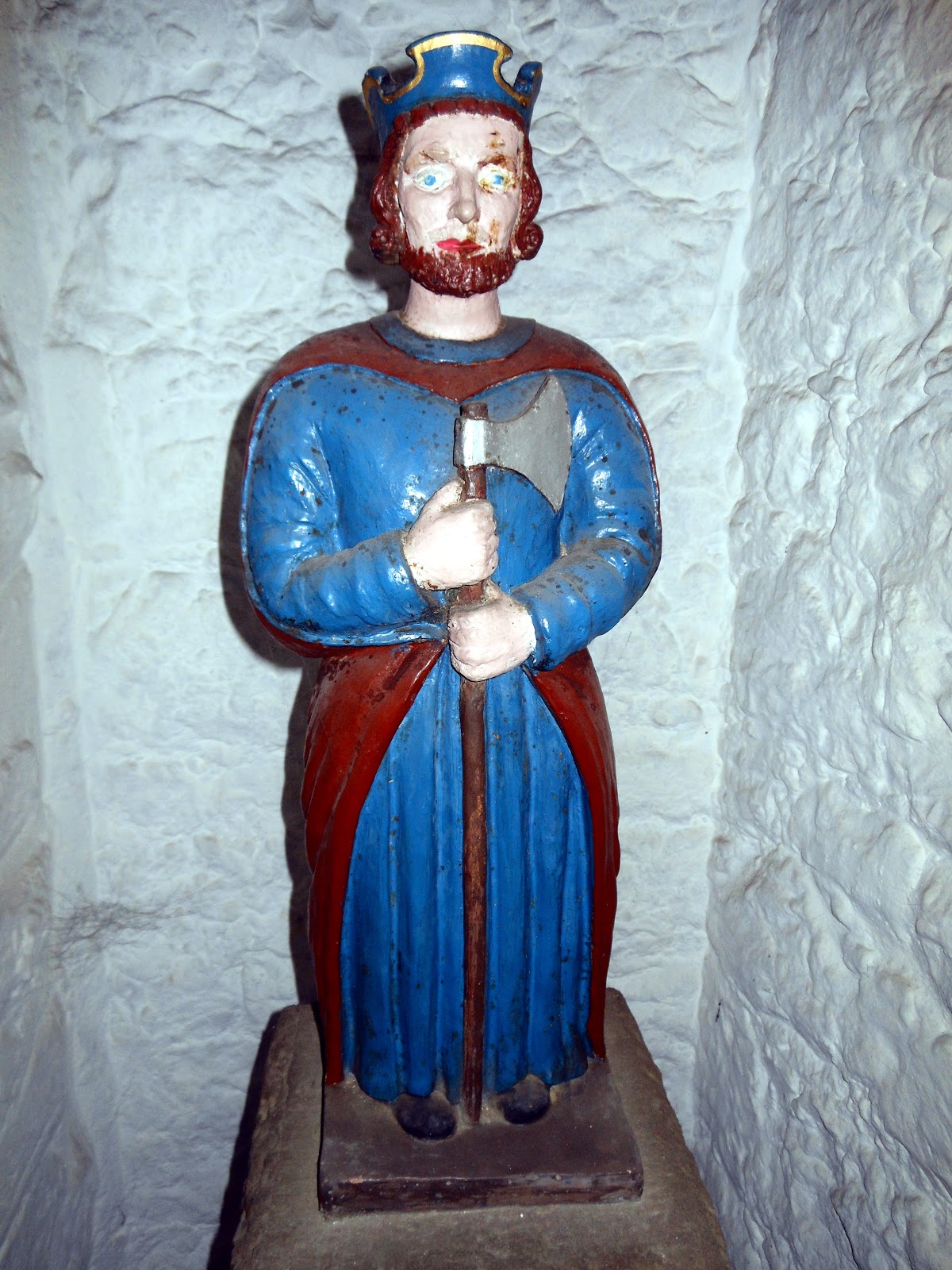 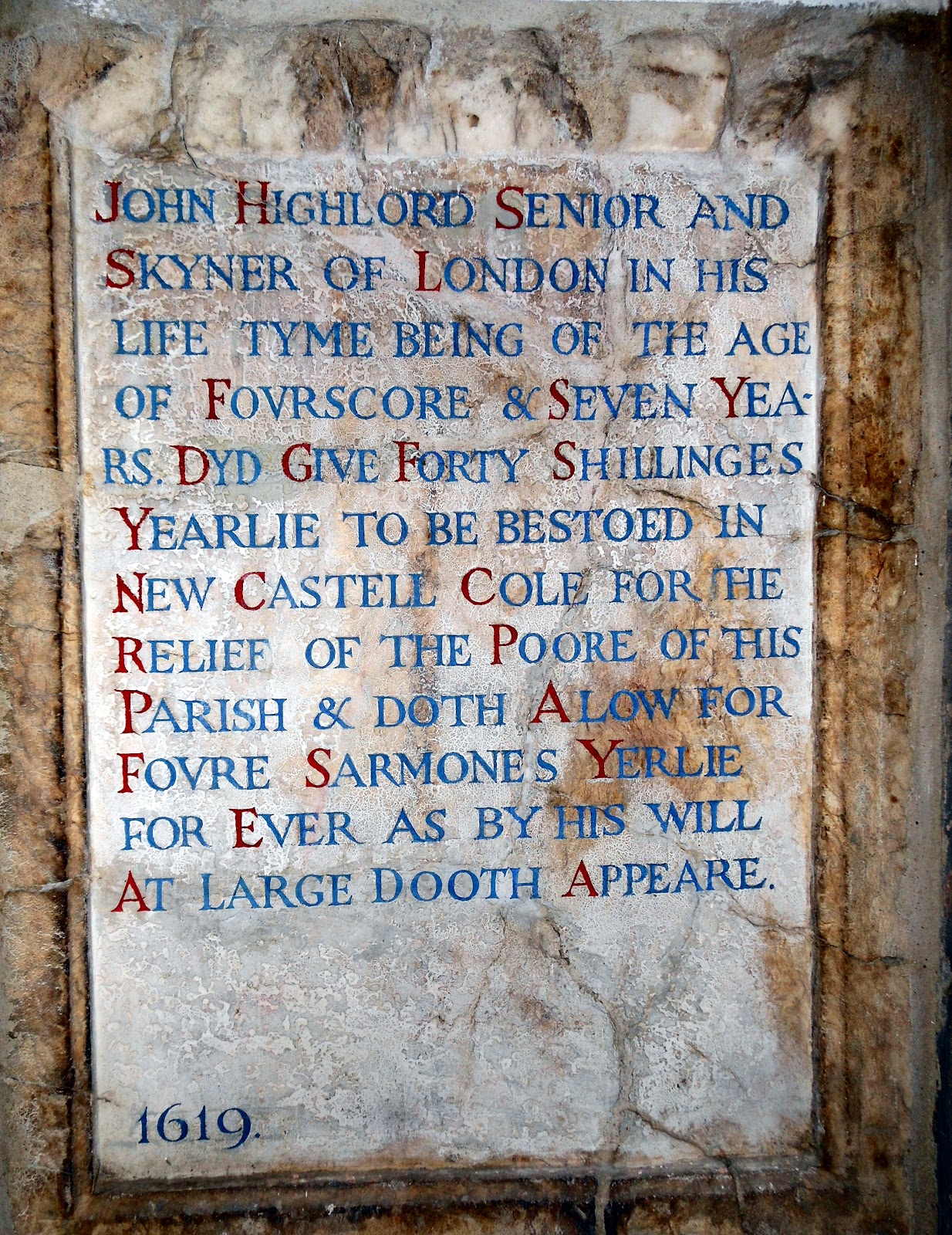 Then a brusque walk to All Hallows by the Tower which is, by way of contrast, so much more spacious but less private and always full of people (some I thought I had seen before) – It houses a brilliant big sculpture by John Robinson of a mother witnessing her child's first steps, teary-eyed.  The crypt is very peaceful with incense burning.  Next, to Temple Church where the circular chapel with the effigies were cordoned off due to some building work, there is always a reflection of the stained glass windows on the floor which I photographed last time I was there, today I saw it in St Olave's too.  Upon leaving I chanced upon Fountain Court where Blake lived out the final years of his life.  He once took a visitor to the window and pointing to the children playing around the fountain said "That is heaven".[1]  It has been invoked and evoked by writers such as Dickens and Verlaine:

One Londoner came here as a schoolboy, with no knowledge of its history or its associations, and immediately fell under the spell of its enchantment; it was as if innumerable good acts or kind words had emerged here as calmly and as quietly as the little fountain itself. At last, in these pages, he has the chance of recording his debt.

Next, to the very historic St Bride's, Fleet Street, whose churchyard today is usually occupied by lots of people eating (on) their lunch-breaks (last time I visited it was empty).  The very welcoming priest welcomed us and I picked up a copy of the splendid book by Leigh Hatts called London City Churches.  It is known as The Printer's Church because it is on the street where they have (or used to), all the press offices.  Inside the church they have reserved seats for all members of the Fowler family, whoever that is and for the Daily Mirror, the Sunday Mirror and also The People.

I had a quick look below in the crypt of the church (oft revisited in dream) – Here are housed Caxton's MS of Ovid from 1480, fetching £90000 at Sotheby's in 1966 – That's the highest price ever paid for a single MS - Some carved stonework from the original church, fragments of a bell, window-glass from the original eighth century church and charred stonework from the 1666 fire, stonework from the eleventh century, a bone hairpin and Samian pottery, coins of the Emperor Victorinus and Tatricus (270 - 280 AD), the base of a dish from 70 – 120 AD, part of a second century bowl and kitchen pottery, the figure of an angel holding a scroll, floor-tiles and an emblem of the Worshipful Company of Haberdashers – All from the pre-1666 church, a twelfth to thirteenth century cooking pot, fragments of an eleventh century font, column with original paintwork from the same period, clay pipes from 1640 – 1880, a copy of the Geneva Bible from 1560 – Some books of Samuel Richardson, part of a Roman pavement and a selection of tombstones from the old churchyard.

I also visited St Clement Danes (for the first time).  This is a church that dates right back to the ninth century.  It was built by Danes who were allowed to live in London (between Westminster and Ludgate) because they had married Englishwomen.  The church leaflet states that 'St Clement was a bishop of Rome who, during the reign of the Emperor Trajan was martyred by being tied to an anchor and thrown into the sea.  He became the patron saint of mariners and since the Danes were seafarers, the church they built was given the name of St Clement Danes.  The crypt is aligned with coffin plates from the bodies that once occupied it.  Henry Mayhew was buried here but I had no time to check whether his coffin plate was on the wall.  A sign on the wall said that the bodies were cremated when the crypt was cleared but when I asked a man who seemed like he worked there why they were cremated (which is unusual and above all un-Christian) he said that they were not.  They were mostly reburied at the Royal Air Force Cemetery in Brookwood.  This being the central church of the Royal Air Force, somebody had written in the guestbook 'Is this what we fought for - A Muslim Britain?' Somebody else had written another racist remark, this is the first time I have seen this in a church but it was not a surprise! I signed it 'Rehan Qayoom – Poet.  A British Muslim’.  Next, to St Martin in-the-Fields which I found to be little-changed and quite uplifting, Nell Gwynn was buried here but her tomb's gone, she may have been down in the crypt which is now a fancy cafeteria for the idle rich! It is currently undergoing an expensive restoration procedure and lots of people had signed the guestbook condemning its re-opening as a superstore or some-such: I would hate for that to happen and said so.

Nearby, the National Gallery and the National Portrait Gallery, starting with the Portrait Gallery (which I like better) giving an hour to each though one would require more, much more time to look properly and do the holdings justice.  I then spent half an hour wasting time trying to find out which bus could take me down to Piccadilly Circus.  Finally getting there I found I had to queue for a while as is always the case here (unless you're pre-booked or a Friend) – The imposing entrance to the Royal Academy of Arts is an inspiration in itself.  Rodin's The Gates of Hell has been placed outside just as one enters the gates of the academy by the spouting waters.  The Chinese lady at the ticket stalls was very rude.  I thought the exhibition itself very poorly produced, although I enjoyed looking at Rodin's monumental work including 2 of my favourites – The Thinker and The Kiss.  There were no notes at all or only a very general line or 2 on most of the sculptures and were it not for Rodin one would leave with the feeling of having been mugged.

Ah, Well.  Bussed it to Charring Cross - Waterstones for a browse of the books and coffee and off to Trafalgar Square where the fountains had been gutted but always the couples practically eating each other, snogging madly in eternal pleasure.  Sat on the steps to the National Gallery as evening engulfed me.  It's not for nothing we're known as the Kissing Nation. In the words of Mir, most of the London poets cannot write verse, and would be better advised to 'Stick to kissing and slavering'.