Abdullah bin Musalama related that Malik told us that he heard Yahya bin Saeed who heard it from Muhammad bin Ibrahim who heard it from Alqamah bin Waqas who related that Umar bin al-Khattab narrated that Allah's Apostle said 'The reward of deeds depends upon the intention and every person will get the reward according to what he has intended. So whoever migrated for Allah and His Apostle, then his migration was for Allah and His Apostle. And whoever migrated for worldly benefits or for a woman to marry, his emigration was for that'.

On 17 April I decided to visit St Botoloph without Bishopsgate which was closed as were St Katherine Cree so I popped into the churchyard of St Andrew's Undershaft (the church itself being closed) to see the many tombstones there and one with the following inscription.


Abraham Sutton's tombstone inscription is also recorded by John Strype in his annotations on Stow's Survey of London. Then to Christ Church Spitalfields: the churchyard of which is now a children's playground with the tombstones stashed up against the wall. There is a memorial to the dead soldiers of World War I in the churchyard. I walked through the market and bought myself an absolutely amazing cup of coffee from an amazing coffee shop on the way home.

On 2 June I set off to attend the Shearsman Reading Series, held at the Swedenborg Society Hall. I got off at Holborn, where I dined all those years ago at the Spaghetti House down the Sicillian Avenue. First I had difficulty in finding Bloomsbury Way (which is tucked away somewhere) and just kept walking round Bloomsbury Square thinking of Pope's verse on it:

In Palace-Yard at Nine you'll find me there –
At Ten for certain, Sir, in Bloomsb'ry Square –

'The Second Epistle of the Second Book of Horace Imitated by Mr. Pope'.

Walked into a posh office with a new Indian chap at the reception who didn't know where the hall was so I walked past him for the café just behind him to see if anyone there knew but he said I wasn't allowed in:

Lend me, a little while, the key
That locks your heavy heart, and I'll give you back –
Rarer than books and ribbons and beads bright to see,
This little Key of Dreams out of my pack

Finally found the Swedenborg Society with 10 minutes to go, rang the buzzer – No Answer. Rang the one for the Swedenborg Press – No Answer. Rang another Swedenborg this and another Swedenborg that – No Answer. Waited outside for a bit in case someone turned up – No one did - A lady doing the same outside the building a bit further down. Walked round to the back – Nothing Doing. Walked back round to the front, rang buzzers, nothing. Finally found a side door and the hall. Nobody was there yet. Nobody did come till about 25 minutes past. Everybody talked to (and knew) everybody else. There were only about 15 people and I just sat at the back, reading Ackroyd's Dickens biography.

St. Pancras Old Church itself was closed but the churchyard was there so I wandered lonelily among the tombstones. It is one of those places one could go to die in. 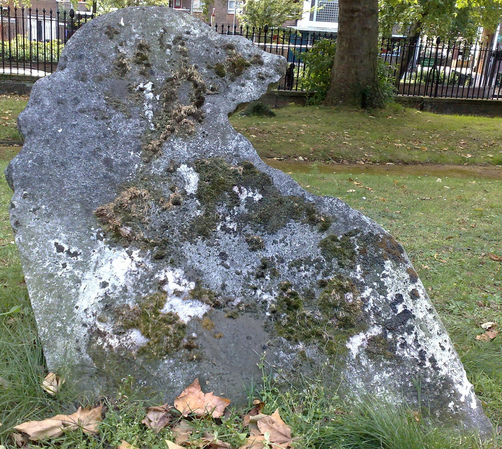 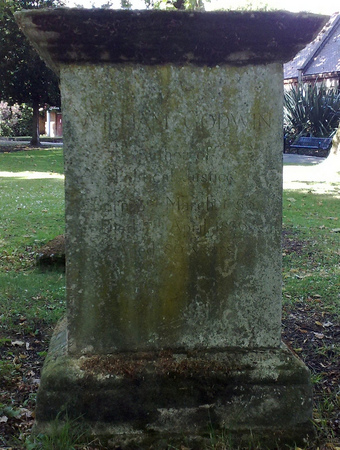 The other side reads the inscription to Mary Jane, stepsister of Mary Shelley and mother of Byron’s illegitimate daughter Allegra. 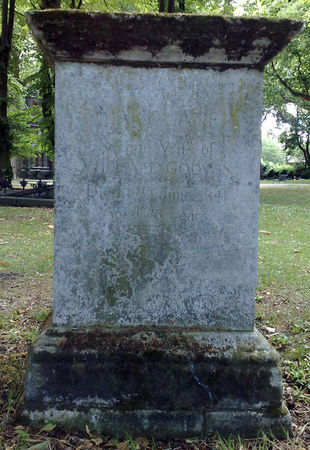 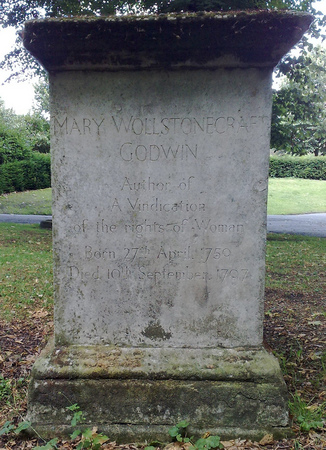 Mary Wollstonecraft
Godwin
Author of A Vindication of
the Rights of Woman
Born 27 April 1750
Died 10 September 1797.

This grave was the favourite meeting place of Percy Bysshe Shelley and Mary Godwin (the daughter of Mary Wollstonecraft). It is where she declared her love for Shelley, offering him both her body and soul, although according to her father it was Shelley who seduced his daughter atop the tombstone. Arm in arm, they walked towards Jane (her sister) who had waited patiently, a little puzzled and envious beside a nearby tombstone. Mary Shelley's novel Faulkner, (1837) has a similar cemetery love scene in which the man responds to the girl's declaration by weeping upon her breast 'Shelley wrote emphatically that 'no expressions could convey 'the manner' in which Mary declared herself'.[3]

Also buried here are the youngest surviving son of the composer Johann Sebastian Bach and the architect and collector Sir John Soane R. A. (1750 – 1837) and his wife. The design of his vault (by himself) was a direct influence on Sir Giles Gilbert Scott's design for the red telephone box. 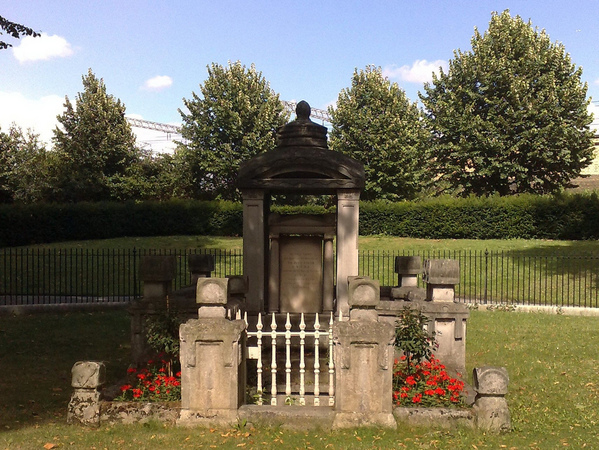 As a young man Thomas Hardy studied architecture in London from 1861 – 1867, his master was based in Covent Garden and was commissioned by the Bishop of London to supervise the proper exhumation of bodies and human dismantling of tombs to allow for the building of the Midland Railway, part of which was to pass over the original churchyard of St Pancras. He passed on this task to Hardy in 1865 who spent many unenviable hours there overseeing the removal of bodies and tombstones, it inspired his poem 'The Levelled Churchyard'. The removed headstones were re-assembled by an ash tree which remains yet and now has railings around it to protect its iconic status. 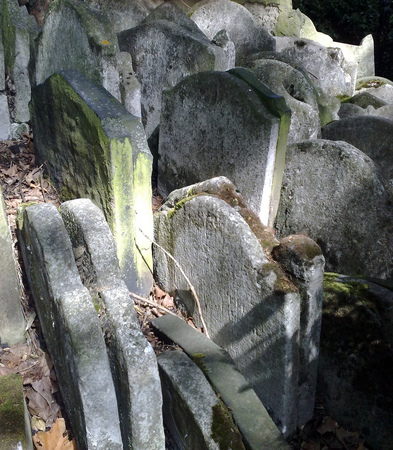 Dickens also refers to the churchyard in A Tale of Two Cities. The inscriptions at the far end of the churchyard have been incredibly well-preserved. 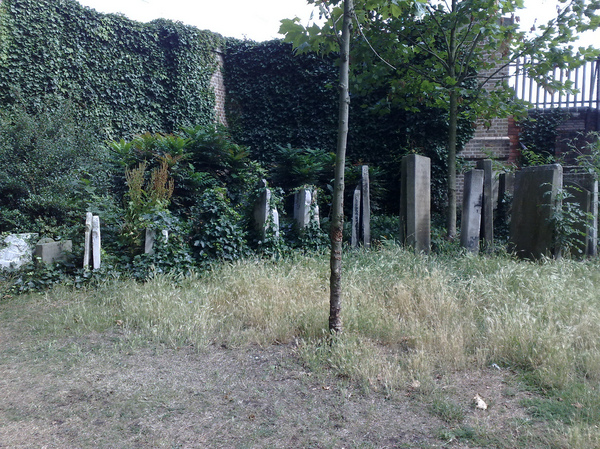 On 4 July I made my way to Kensal Green Cemetery for the annual Open Day. 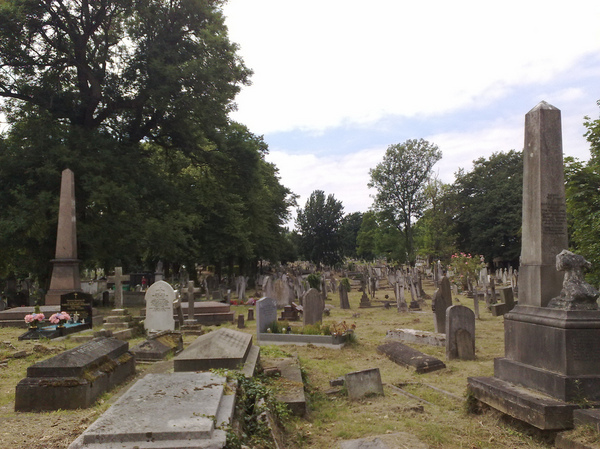 I found the grave of Mary Hogarth, Dickens' sister in-law whom he loved and whose early death tormented him for the rest of his life. She is buried in the family grave with George Hogarth who inserted in the Evening Chronicle sketches of London life by Charles Dickens and who to become his son-in-law later on. From 1846 - 1866 he was music critic of the Daily News and of the Illustrated London News. He was Secretary of the Philharmonic Society from 1850 - 1864. Hogarth published Musical History, Biography & Criticism (1835) and other works on music. Dickens' obsession with his young sister-in-law has never been satisfactorily explained, her sudden death at an early age was a tremendous shock to him and for a time he hoped to be deposited in her grave, but ceded his place to her brother, also George. 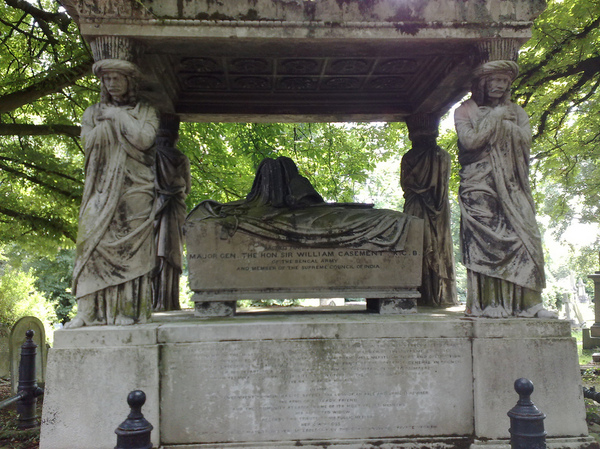 Major General Sir William Casement, (1780 - 1844). Member of the Council of India. His monument was sculpted by E. M. Lander, local monumental masons and depicts a sarcophagus surmounted upon a canopy on which stand 4 servants of the British Raj:

Late of Bengal but now of Kensal Green,
Sir William Casement oversees these kids,
jobless for a year, employed to clean
his lichen-encrusted caryatids.
Chuprassie, sepoy, subahdar,
used to serve Sir William's slightest whim.
Now, things being in Britain what they are,
these have no choice but bow and scrape to him. 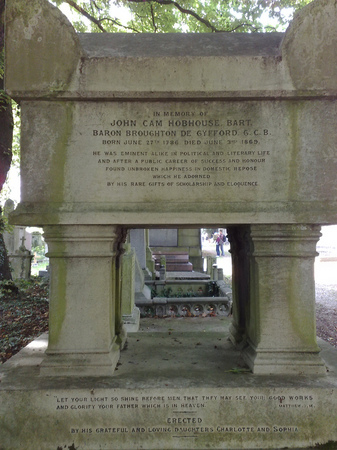 In Memory of
John Cam Hobhouse, Bart.
Baron Broughton de Gyfford. G. C. B.
Born June 27th 1786. Died June 3rd 1869.
He was eminent alike in political and literary life
and after a public career of success and honour
found unbroken happiness in domestic repose
which he adorned
by his rare gifts of scholarship and eloquence.
“Let your light so shine before men, that they may see your good works,
and glorify your Father which is in heaven.”
Matthew, V, 16.
Erected by his grateful and loving daughters Charlotte and Sophia.

Baron John Cam Hobhouse of Broughton de Gyfford. Loyal friend and Literary Executor of Lord Byron.[4]Dr George Birkbeck, (1776 - 1841). Philanthropist, educationalist and Professor of natural philosophy at Anderson University, Glasgow. Birkbeck was involved in the foundation of a number of institutes including the London Mechanics Institute of which he was elected Life President in 1824. This subsequently became Birkbeck College. He was also a founder member of the Council of University College, London.

[1] Some say mounted warriors, some a fleet of
Ships, and some say foot-soldiers are the finest
Sight upon the black earth. But I believe it's
What you desire.