Minute after minute, aeon after aeon,
Nothing lets up or develops.
And this is neither a bad variant nor a tryout.
This is where the staring angels go through.
This is where all the stars bow down. 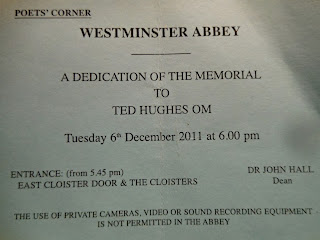 I received an invitation to attend the unveiling ceremony of a memorial stone to Ted Hughes by Seamus Heaney in Westminster Abbey.  I set off at 3pm and realised half-way to the station that I had forgotten the invitation card at home so had to go back to pick it up. 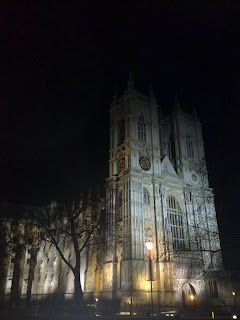 Walking past the Houses of Parliament I saw the Home Secretary Theresa May coming out in her car.  The abbey always looks really awesome in the floodlight.  I entered through the arch and the East Cloisters which were really dark and atmospheric.  It was quite an experience walking through the dimly lit cloisters with tombstones on the floor until I reached an area that had been cordoned off where people gathered slowly.  A glance upon the floor revealed a tombstone marked Aphra Behn, the Restoration dramatist.  I spotted Simon Armitage and got up from where I was sitting upon the stone benches along the walls to talk to him about his work on 'Sir Gawain & the Green Knight' and its relation to the eighteenth chapter of The Holy Quran but then changed my mind and sat back down thinking, perhaps, that this was not the occasion for such talk.  As always everybody always knows each other or seems to, so I have a habit of taking out my book to read.  I read a bit of Pablo Neruda: A Passion for Life by Adam Feinstein before we were ushered in through a door leading to Poets' Corner.  There was a lady to my right who asked how or if I had a Hughes connection.  I had read Plath first but then really discovered his work at college after Birthday Letters came out.  She remarked that she was a librarian at Cambridge University where she had seen him read in the seventies upon which the lady to my left observed that she was from Cambridge too.  I spotted Andrew Motion and Hughes' widow Carol dressed beautifully in opal, she laid flowers from the garden at Court Green (their house in Devon). 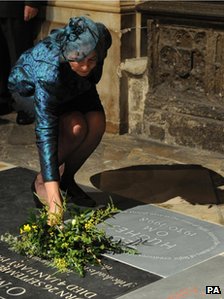 Sitting in Poets' Corner among so many countless tombs and memorials to writers, poets, historians and theologians and just being present in Westminster Abbey is always a spiritually uplifting experience.  The intensity of historical presence is overpowering.  The Urdu poet Parveen Shakir wrote a poem on this sense of being overwhelmed by history in her poem 'Westminster Abbey'.  All the seats had the Order of the Service placed upon them.  Dr John Hall, the Dean said "We have come to Poets' Corner, where the word is celebrated.  Here Geoffrey Chaucer lived and died, and was buried in 1400.  Here William Caxton set up his printing press in 1476.  Here writing in English and its publication were first achieved."
"Buried here is all that could be buried of Edmund Spenser and John Dryden, Tennyson, and Browning.  They are remembered; their words live on."  Lord Evans of Temple Guiting read from Hughes' letter to Plath of 1 and 2 October 1956 scientifically arguing in favour of reading aloud.  Hughes says that was how all reading was done until the invention of Caxton's press.  It is an incredible passage to read.  This was followed by a reading of Hughes' poems 'Full Moon and Little Frieda' 'Anniversary' and 'Where I Sit Writing My Letter' by Juliet Stevenson.  The acoustics of the abbey offering a resound.  Then Heaney who I saw for the first time delivered an address, beginning with a quotation from Beowulf and remarking upon Hughes' natural use of the alliterative Anglo-Saxon meter in, for example, the first line of 'The Thought Fox' and in 'Fern'.  But, he said, he did not intend to lecture on Hughes' uses of language and meter.  This was followed by him unveiling the memorial stone, Daniel Huws' reading of 'In Memory of Ted Hughes' by the poet R. S. Thomas and Heaney's readings of 'Some Pike for Nicholas' 'For the Duration' 'That Morning'.

The Order of Service contained some interesting points about Poets' Corner: Chaucer was buried here not because he was a great poet but because he had served as the Clerk of Works to the palace of Westminster, Joseph Addison first referred to 'the poetical quarter' in The Spectator and the first written use of the title that is known was in a poem of 1733 'Upon the Poets' Corner in Westminster Abbey'.

In all about 300 people attended.  As everyone walked past the plaque I glanced at the names on the chits upon the chairs, lots of lords and ladies and one 'Mrs T. S. Eliot' who I've never seen and didn't catch this time either.  There were refreshments afterwards for those with a blue ticket.  I did have 2, one white and one blue but I'm certain it wasn't the blue one so I made my way back.  There were carol singers at Westminster station singing 'Ding dong merrily on high':

1 comment:
Email ThisBlogThis!Share to TwitterShare to FacebookShare to Pinterest
Newer Posts Older Posts Home
Subscribe to: Posts (Atom)
Rehan Qayoom is a poet of English and Urdu, editor, translator and archivist, educated at Birkbeck College, University of London. He lives in London.