From 'The Light of Truth' 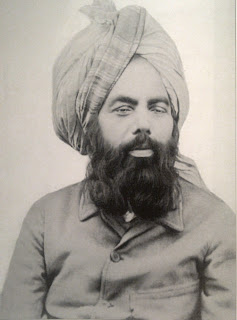 Just over a century ago it was British rule in India that allowed Indians to freely practice and preach their religions.  Whereas it was not so under the earlier Sikh dominions and under Muslim rule the founder of Ahmadiyya may have been killed for claiming to be the Promised Messiah and the long-awaited Mahdi.

The recent protesters who burnt the poppy in Hyde Park are happy to receive British Citizenship and all the benefits and freedoms that come with it and yet they fail to show any respect or decency towards the people of this country.  Such barbaric acts have nothing to do with any true religion.  The poppy they burnt symbolised the remembrance of soldiers who lost their lives fighting for their countries.  Islam teaches that one should show complete loyalty to one's country and be grateful to those who do good to you.  On the other hand the Royal British Legion praised members of the Ahmadiyya Youth Organisation who raised thousands of pounds by taking part in the Poppy Appeal Fundraising.

It was Britain which provided the Ahmadis refuge when they were oppressed (and Muslim countries legislated to deprive them of their fundamental Human Rights) as it had served as a refuge for the followers of the earlier Messiah.  For Ahmadi Muslims the prayers of the Promised Messiah عليه السلام are the spiritual forte behind the strength and survival of the British Monarchy and it is about this country that it was prophesied:

So I can claim that I am peerless in rendering these services and I can state that I am alone in this support and I can say that I am a talisman and a refuge for this government which safeguards them from calamities and God granted me the tiding saying 'God is not such as to wipe out with chastisement those among whom you dwell.'  So this government will soon come to know if it has an inkling of recognizing people that there is no other person who can equal me in exemplifying well-wishing of this government and in helping them.

2 comments:
Email ThisBlogThis!Share to TwitterShare to FacebookShare to Pinterest

Reply to an Argument Regarding the Interpretation of 'Seal of the Prophets'.

Muhammad is not the father of any of you men but he is the Messenger of Allah and the Seal of the Prophets; and Allah has full knowledge of all things.

In his book With Love to the Ahmadis of the World, Farhan Khan has referred to a passage in the book Finality of Prophethood by Hazrat Mirza Tahir Ahmad.  In the chapter about the statements of Shaykh Muhiyudeen ibn al-'Arabi, Mr. Khan alleges that Ahmadi Muslims interpret an 'isolated quote' of the Great Shaykh to suit their own understanding of the term Seal of Prophets.  First of all, it seems that either the references given (to ibn al-'Arabi) in this book have not been understood by Mr. Khan or he has deliberately chosen one small section of the quoted text so as to deceive his readers.

There is an Hadith [Tradition] of Prophet Muhammad ﷺ narrated in Sahih Bukhari that is mentioned by Shaykh ibn al-'Arabi in the course of this discussion in his magnum opus Futûhât al-Makkiya [The Meccan Revelations] that the Prophet of Allah said that 'When this Caesar will die, there will be no Caesar after him. When this Khusroe will die, there will be no Khusroe after him.  By Him in Whose Hand is Muhammad's soul, surely you will spend their treasures in Allah's Cause.'  Hazrat Khalifatul Masih IV says:

That is to say, their glory, their pomp and show will be destroyed by the Muslims. In this Hadith, the Holy Prophet ﷺ in his unique wisdom has clearly explained the meaning of word la [no] by saying  Fala Kaisera Ba’ada Hoo ['There will be no Caesar after him'] and Fala Kisra Ba’ada Hoo ['There will be no Khusroe after him'], there would be no Caesar after him (after this Caesar) and there would be no Khusroe after him (after this Khusroe). He [ibn 'Arabi in Futûhât al-Makkiya] makes it clear that La [no] used in this context does not signify the exclusion of an entire genus. Rather, it is used to emphasize that there would be no one who would attain their majesty and their magnificence.
Accordingly, we had Caesar succeeding a Caesar and a Khusroe succeeding a Khusroe for a thousand years after the Holy Prophet ﷺ but they never attained the glory and grandeur of the Caesar and Khusroe of the times of the Holy Prophet ﷺ.

Let us now look at the passages quoted by Hazrat Mirza Tahir Ahmad in full and then let every sane person decide themselves whether the Ahmadiyya interpretations regarding the Finality of Prophethood in the writings of ibn al'Arabi stand up to scrutiny or that of Mr Khan:

We know this with certainty that in the Muslim Ummah there will be individuals whose status, according to Allah, will be of prophets but such prophethood will be without any new law or Shariah.
Prophethood will continue in mankind till the Day of Resurrection although prophethood bearing a new Shariah or law has come to an end. It must be realized, however, that bringing a new law is one of the many duties of prophethood.
The prophethood which came to an end with the advent of the Holy Prophet ﷺ was Law-bearing Prophethood - a prophet with a new book and new law. There is no room for such prophethood after The Holy Quran. This is the correct meaning of the Tradition, which contains the Holy Prophet’s saying that there is to be no prophet after him. The Tradition only conveys that after the Holy Prophet, there can be no prophet who will replace his Sharia with another one.  Henceforth, whenever any prophet comes, he will be subordinate to him and his Shariah.
When the Imam Mahdi makes his appearance, none other than the Orthodox Ulema and theologians would be his most ardent and open enemies.

Commenting upon the Quranic verse:

And there is none among the People of the Book but will believe in it before his death; and on the Day of Resurrection he [Jesus] shall be a witness against them -

Jesus (peace be on him) shall descend amongst the Muslim Ummah as an arbritator without a new law. Most surely, he will be a prophet. There is no doubt about it.  He is bound to descend in the Latter Days in a new physical form.

Here you would note Hadhrat ibn-'Arabi states emphatically that the Messiah would be a new Messiah and that he will be a prophet. Despite all this evidence, our opponents would continue to insist that there will be no new prophet.

For further readings into Ahmadiyya understanding about the idea of the Finality of Prophethood see 'I am the Master of the Bezels: Hazrat Mirza Ghulam Ahmad on ibn 'Arabi', by the author.